“You’ve never been to Portland?!”

This was the typical response I received while I was in Portland, Oregon and Vancouver, Washington over the past weekend after telling people it was my first time in town.

And no, I had never been to Portland.

While I was born on the Palouse in Moscow, Idaho, I grew up in the Tri-Cities area in Southeastern Washington.  One would think, being within a four hour drive of the place, I would have visited Portland at some point in my childhood, but it just never happened. 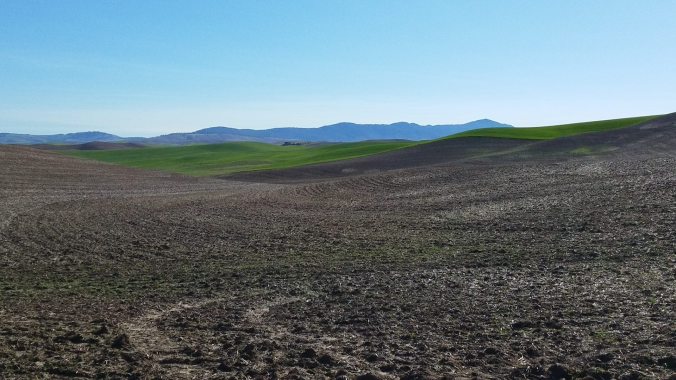 Other than visiting Seattle a handful of times, our family travels rarely crossed the Cascades into western Washington, or Oregon for that matter.  We typically went north toward the Spokane and Couer’d’Alene area, south into northeastern Oregon, or most often, east toward Moscow and into Idaho’s northern panhandle, or the western Montana wilderness.

I’ve got my job at Washington State University – Pullman (Go Cougs!) to thank for the opportunity to visit the Portland/Vancouver area, as I was sent there as part of a work-related conference.  I landed in Portland Saturday night and drove to Vancouver in a rental car to where my hotel was.  It was a bit rainy and dreary, about what I was expecting to see as I arrived in town.

Luckily, being a Saturday and later in the evening, I didn’t hit any of the infamous Portland traffic on my way across the Columbia River and the state border into Vancouver.  That wouldn’t happen until Tuesday on my way to the airport.

Nonetheless, after getting checked into my room, I set off on foot in downtown Vancouver and stumbled upon a restaurant called Pacific House.  After having an excellent Reuben sandwich, I walked around downtown a little more, and just as I was about to head back to my hotel, I came across a brewery a coworker of mine had told me about, named Loowit Brewing.  I ordered a Loowit Lager and headed toward a back room where I heard music.

A three-man bluegrass band was playing in this crowded backroom.  The band was back dropped by large stainless-steel silos and wooden barrels.  The band was a local group, and I unfortunately can’t remember their name.  But damn, the lead guy in the band could play a mean fiddle.

The next day I had about the first half of the day to do some exploring before the conference began that afternoon, so I did a little research and headed east along the Columbia River Gorge, and arrived at my destination.  The infamous Multnomah Falls.

After speaking with a forest service employee at the guest area, I got a trail map, he pointed me in the right direction, and I set off past the falls and into the beautiful Oregon woods.

Growing up in a desert in the Tri-Cities, and doing most of my camping in the far drier Idaho and Montana Rockies, my first hike in the Cascades was one jaw-dropping moment after another.  The lush spring greenery was incredible, moss covered almost everything, and I was surrounded by evergreen everywhere I looked. 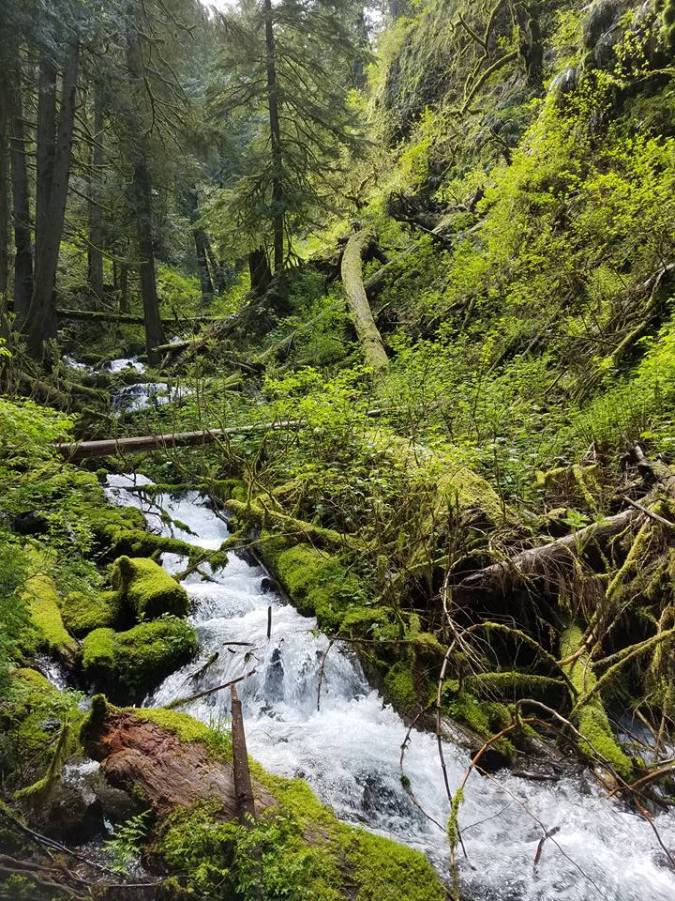 The trail I took was uphill for the first two miles or so and walked alongside a stream that carried a heavy spring runoff.  I must have passed at least 7 or 8 waterfalls as I made my way up, some bigger than others.  I had to stop about every 30 yards to take pictures to try and capture as much of the beauty that I was experiencing.

Eventually, the trail led to Lemmon’s Viewpoint, offering a mostly unobstructed view of the mighty Columbia River Gorge that you could only catch glimpses of through the trees for most of the hike. 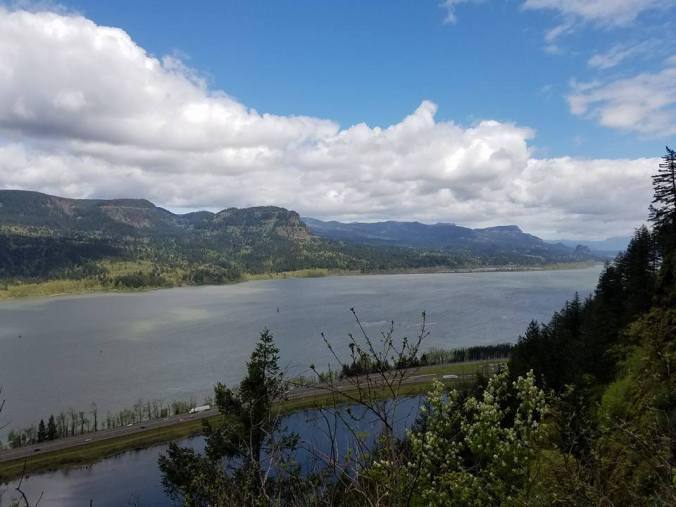 It was at Lemmon’s Viewpoint that a chipmunk, or a Timber Tiger as my Dad would call it (anyone in my family has been scared nearly half to death once or twice on a camping trip by my Dad bellowing “TIIIIMBEEEERRR TIIIIIIGEEEERRR!” at the sight of one of the furry little rodents), hung out with me for a few moments before he finally scurried off into the brush.

Estimating the best I could from the map, the loop-hike that began at Multnomah Falls and finished up not far from the near-equally jaw-dropping Wahkeena Falls, was around 5 miles.  It was one of the most beautiful hikes of my life, and I only wish my partner Amber had been there to share it with me.  We will be back without a doubt to experience more of what northern Oregon has to offer. 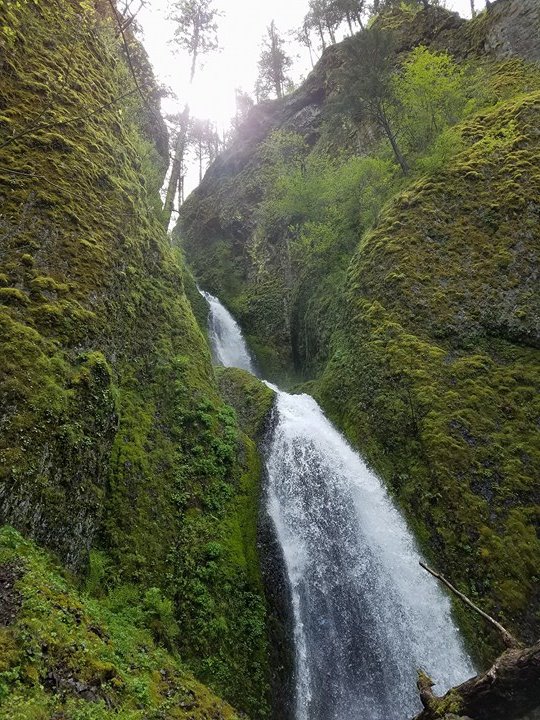 After coming down off the mountain, I had worked up quite an appetite.  I had plans to visit the Nike Outlet while in the area, because you can’t go to Portland without spending way too much money at a Nike Outlet, so I set off for Portland, loyally heeding the instructions of my GPS to find the way.

Once I got into Portland and located the Nike Outlet, I drove down Martin Luther King Jr. Blvd. in search of somewhere to have lunch, and I settled on Old Town Brewing.  As soon as I walked in, the atmosphere captured me, reminding me of an old mountain lodge.

I ordered a Ghost Pie pizza, which was absolutely delicious, and washed it down with about 12 glasses of water to rehydrate me after my hike.  The staff was friendly too, as I spent much of the time talking with the bartenders who gave me background on the area, and whom I gave background on the Palouse.  I would head back to Old Town Brewing one more time on Tuesday as I waited for my flight back to Pullman, having an equally positive experience.  I highly recommend it to anyone heading to Portland in the near future.

I also got a chance to go check out the Washington State University – Vancouver campus while I was over there and check out what fellow Cougs experience going to WSU on a campus outside of Pullman.  It was absolutely gorgeous, and made me proud to be a Coug. 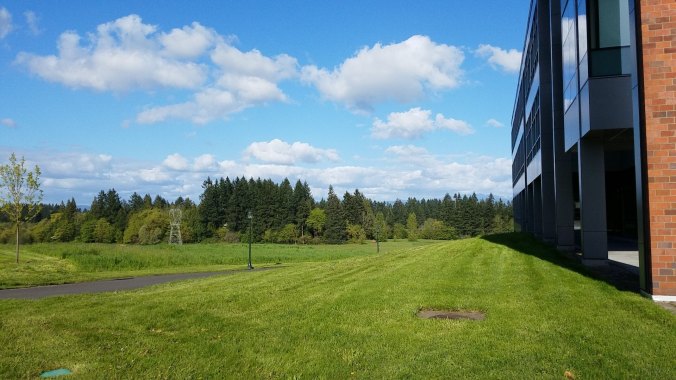 The rest of my trip was almost entirely spent back in Vancouver at the hotel, where I attended a ridesharing conference that was very enlightening.  As I sit here back in Pullman writing this blog post, I can safely say that this business trip was a total success, both in terms of getting to see a sliver of what Portland and Vancouver have to offer, and in a professional sense.

As I sit here back in Pullman, however, I’m reminded of my love for the Palouse.  The weather has been wonderful since returning, and while the beauty of the northern Oregon wilderness left me awe-struck, the bright green hills of the Palouse and wide-open, cloudless blue-skies will forever tug at my heartstrings.  And, whether I am living here or somewhere across the country 10 years from now, the Palouse will always be my home. 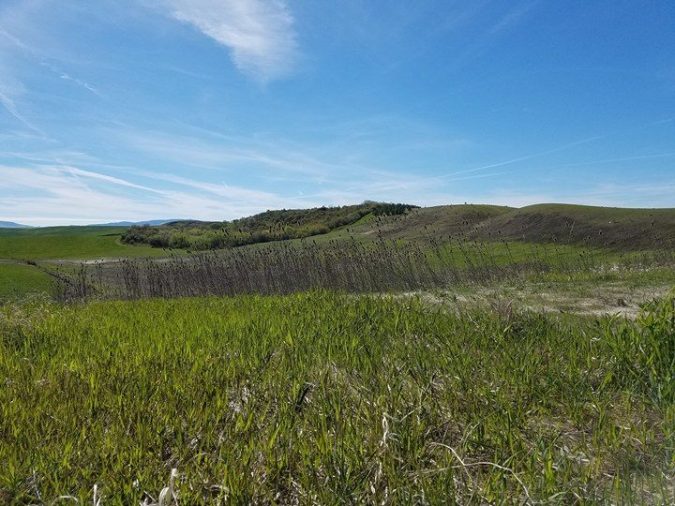