Soft white flakes dance in the air like thousands of tiny Tinkerbell’s, swirling up, down, and side-to-side with any breeze or movement. The little white orbs glow in the sunlight, reminding one of fireflies on a warm summer night, and it seems the only thing that could bring them out of the air would be a heavy downpour of rain.

These aren’t snowflakes, mind you, but tree pollen from the cottonwood trees that are popular on the Palouse. And if you suffer from seasonal allergies, you may want to wear a facemask when you see the “tree snow” in the air.

It’s that time of year again, everything is blooming and has come to life. Spring is in full swing on the Palouse.

Living on the Palouse, spring is my favorite season of the year, as everything comes to life in a nearly explosive way once slightly warmer temperatures arrive after the early spring rains and snowstorms. Much of the calendar year, the Palouse landscape is made up of browns, yellows, and beiges, as the prairie grass dries out by early July, and the area’s more classic images of rolling golden wheat fields dotted with lonely clusters of ponderosa pines make up much of the area’s landscape.

But in my opinion, from about April to June, the Palouse is at its most strikingly beautiful. For many WSU students, they never get the chance to experience this side of the Palouse, as they are heading home for the summer or graduating from WSU the first week of May, just when spring is really taking hold of the area. But for those lucky enough to spend a summer in Pullman, they see a completely different version of the Palouse than the hot, dry autumns, and cold, snowy winters (both beautiful in their own right).

One of the first signs of spring is when the birds begin to sing. This usually happens sometime around early March as the snow is thawing, and the music they sing alerts everyone around that spring is on its way. 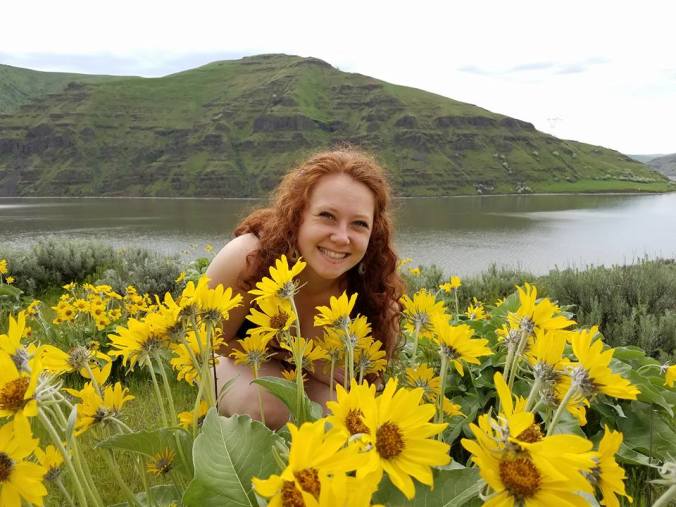 Amber near Wawawai Landing on the Snake River, April 2017.

One of the first physical changes of spring comes later in March when the early spring flowers begin to pop up and bloom. Over the next few months, daffodils, balsam root, lilies, yellow bells, hyacinth, lupines, and countless other flowers wake from their winter slumber all over Moscow, Pullman, and the rest of the Palouse.

Then, with a little warmth to go along with intermittent rain, the prairie grasses of the Palouse begin to grow, and by late May and early June, places like Kamiak Butte, the banks of Paradise Creek, and all over eastern Washington and north Idaho, tall, lush, green prairie grass covers the landscape.

While the views are breathtaking, one of my favorite parts about spring on the Palouse are the smells. Stepping outside in the morning, with a heavy dew on the grass and trees, the smell of life is nearly intoxicating. If it could be bottled, I would want that smell to follow me around all day long. The smell of lilac blooming, pine trees breathing, and the waking of the earth is quite possibly my favorite smell on earth.

Our cat Rudy, an indoor cat, even recognizes, and loves springtime. Once things start to warm up, and the smell of spring seeps into the house through the door jams and windows, Rudy loiters near doors, hoping to dart outside to roll around in some dirt, eat some grass, or try and get a closer look at the neighbor cats he usually stares and meows at from the windows. During the cold winter or extremely hot summer months, Rudy has no interest in being outside. But this time of year, he yearns to bask in the sun, and smell the earth and the fresh spring air.

Maizy, our one-year-old Blue Heeler-Australian Shepherd mix, also seems to recognize spring, as her energy levels have been through the roof over the past month, and all she wants to do is be outside (as long as we’re outside with her, of course), go on walks, and chase Frisbees and tennis balls.

The best way to appreciate this time of year, is to be out in it, and quietly soak it in with your eyes, nose, and ears. So go outside, and just be. I don’t have much else to say right now.

Holds a cup of cowslip wreaths,